TCR Story of the Month for February: "The Map" by Don Schwartz

The Committee Room proudly presents "The Map" by Don Schwartz as TCR Story of the Month for February.  A thought provoking look at Germany's violent past and thriving present, "The Map" is short fiction that takes on big issues in a fascinatingly imaginative way.

"The Map" was published in The Adirondack Review (Winter 2011) and won that publication's Fulton Prize for excellence in short fiction. 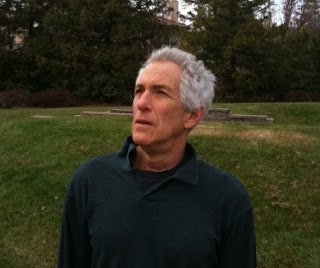 A Brief Interview with Don Schwartz

Q: How long have you been writing?
A: Most of my life, but I’ve only been writing short stories for a year.

Q: Where did you get the idea for "The Map?"
A: Several years ago I went to Berlin. I had been to the city once before when it was still divided by the Wall. When I got to Berlin on this second trip, I was amazed how much the former East Berlin had changed. After visiting Berlin, I traveled to Poland. I stayed in Warsaw. Then I visited the concentration camps---Auschwitz, Birkenau, and others. The story came from those experiences.

Q: Who are some of your favorite "classic" authors?
A: As a kid I loved A Tale of Two Cities by Dickens. What I loved about the book was the way Dickens foreshadowed the coming French Revolution, how he could take a broken wine barrel and turn it into a portent of blood on the streets.

Q: Who are some of your favorite contemporary authors?
A: I think Gravity’s Rainbow by Thomas Pynchon is an amazing book. Borges, obviously, is an inspiration. And Jose Saramago, while I don’t think much of his politics, had more imagination than most contemporary writers. And Roald Dahl’s children’s stories. Every summer I teach creative writing to kids. I never tire of reading Dahl’s stories to them.

Posted by tvmoviefan at 8:30 AM