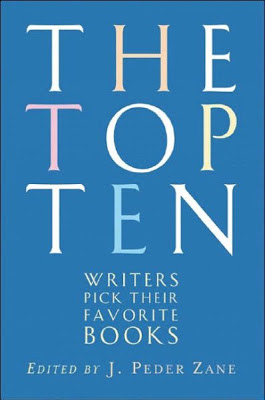 
Jennifer Egan, Rick Moody, Josephine Humphreys, Maile Meloy and Ayelet Waldman are among the writers whose selections have been added in The Top Ten website.

While the authors' selections offer up some unsurprising choices -- Anna Karenina and Madame Bovary are the most frequently cited favorites -- such admiration only serves as a reminder that these "great" books are indeed great. The majority of the favorites are mentioned just once. Some titles are decidedly unexpected. Douglas Coupland put Truman Capote's usually disdained Answered Prayers at the top of his list. David Foster Wallace gave a nod to Tom Clancy's The Sum of All Fears. Stephen King's top pick was The Golden Argosy, an obscure collection of classic short stories that he happened upon in a used bookstore many years ago. In a brief essay accompanying his list King says -- "The Golden Argosy taught me more about good writing than all the classes I've ever taken. It's the best $2.25 I ever spent."  .

Though the focus is on fiction, Zane kept the rules loose, allowing the authors to list non-fiction and even non-books. Adriana Trigiani's favorites include Oscar Hammerstein's lyrics to the song "When I Grow to Too Old to Dream" and three screenplays by Preston Sturges -- The Palm Beach Story, Sullivan's Travels, and The Lady Eve.

A reviewer for The Quarterly Conversation remarked -- "As I glanced through The Top Ten, I was immediately pulled toward all the unlikely books that squeezed their way in."

Zane is a former book review editor and books columnist for the News & Observer of Raleigh, North Carolina. His idea for The Top Ten came out of an earlier book he edited, Remarkable Reads, a collection of essays (all of which first appeared in the News & Observer) in which authors including Bebe Moore Campbell, Jill McCorkle, and Aimee Bender, recounted their life altering experiences with books. Zane explained to TCR -- "I have always been interested in helping readers meet writers on the great common ground they share – as passionate lovers of literature. Scratch a literary idol, and you’re sure to find literary idolizer,"

Using his connections as a book review editor, Zane began The Top Ten project by approaching a few writers each week. When someone agreed to participate, that person's name was added to the invitation letter so that each version had more authority. "After a while, it became a cocktail party everybody wanted to attend," Zane told TCR.

"The Top Ten is not trying to anoint a canon," writes Zane in his introduction. "Its message is not: Here are the only ten books you need to read. Instead it points you toward the many fine books awaiting your discovery, highlighting a multitude of books, each and every one of which is worth your time."

An outstanding feature of The Top Ten book and website are the well-written summaries of the works selected by the authors. "As book review editor of the News & Observer I had a stable of about fifty critics that I worked with regularly." Zane told TCR. "Once the lists started coming in, I identified the books with which I was familiar and wrote those up myself. Then I sent out the other titles to my writers and asked them to claim the ones they knew. I also asked some of the contributors to write a brief appreciation of one of their picks. Francine Prose, for example, wrote about The Charterhouse of Parma and Tom Wolfe wrote about the Studs Lonigan trilogy."

Vladimir Nabokov's Lolita, which first appeared in 1955, is the most recently published title included among The Top Ten's greatest books of all time (also known as "The Top Top Ten List)." When asked by TCR if he has any candidates among newer books that might someday make it to the ultimate level of greatness, Zane said -- "I think it’s important to note that the whole idea of a canon is not a testament to greatness so much as it is an organizing principle. We can only remember so many books. So, over time, we select a small sample that still speaks to us. The farther back you go, the fewer the number books we remember. And yet, they become ever more revered. Most of us tend to read contemporary books because they speak most directly to the world we live in. For our moment, they are great. As the years go by and things change, they seem less relevant. This does not mean that they were not great – for their time – just that their usefulness was limited."

Zane, whose own top ten includes William Faulkner's Absalom, Absalom! and Thomas Pynchon's Gravity's Rainbow, doesn't think that writers judge books differently than non-writers. Writers, like all readers, have personal favorites that may not be meaningful to other readers. Zane told TCR -- "The most important thing I learned from The Top Ten is that it is almost impossible to make general statements about books and readers...The lesson was clear -- great books are the ones that matter to us, that strike a particular chord in us for reasons that reveal important things about ourselves."

Carole Goldberg. "The Best of the Best: Most Memorable Books." Hartford Courant. 25 Feb 2007.

Posted by tvmoviefan at 7:30 AM