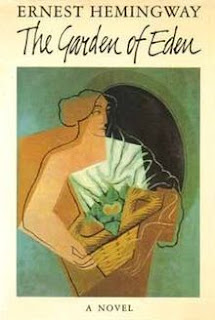 In this fascinating article recently published in Narrative,  author and editor Tom Jenks recalls being a young staffer at Scribner's in the 1980s and being given the task of editing for publication Ernest Hemingway's unfinished novel, The Garden of Eden.


"[Charles Scribner, Jr.] gave me two paper grocery sacks filled with manuscripts and enjoined me to read them. That night I schlepped The Garden of Eden home on the subway. Later I got into bed and started reading, determined to put the task behind me. But by morning I was convinced that the mass of material held a story worth publishing. The work was wildly uneven, and much of it was embarrassingly weak, though portions had sustained strength and suggested a new sort of Hemingway, one whom E. L. Doctorow would characterize in his review of the book as reaching for a fuller, more thoughtful, emotional range with a hint of feminine understanding."

Posted by tvmoviefan at 1:00 PM