The Books That Mattered: "All the King's Men" and more

The Committee Room pauses to reflect that, in most cases, we only dimly recall books years after our reading of them is done. Some books get completely forgotten. Lasting bonds are forged with only a small percentage of the books that come into our lives. These might be called the books that mattered.

In The Books That Mattered: A Reader's Memoir, writer and editor Frye Gaillard considers books -- both fiction and non-fiction -- that have mattered most to him. "I had always wanted to write a book about books, those that had brought me the greatest delight through the years," Gaillard writes in the book's prologue."I wanted to offer a reader's tribute, but more than that, a kind of reader's memoir, a recounting of exactly why and when these volumes had mattered "

Gaillard tried to keep the list to twenty-five titles but somehow it grew to over thirty. His selections are not necessarily what he considers to be the best books ever written "but simply those that have mattered most to me."
In eleven amiable, conversationally-toned essays that loosely group titles thematically, Gaillard explains why each of these books stayed with him.

The list includes a few classics (Huckleberry Finn, The Grapes of Wrath, for example) but is mostly made up of lesser known works such as Killers of the Dream, Lillian Smith's 1949 autobiographical account of the absurdities of life in the segregated South from a white person's perspective, and The Old Man and Lesser Mortals, a collection of journalism pieces by Larry L. King, best known for his book to the musical The Best Little Whorehouse in Texas.

Several of Gaillard's selections, such as Unbroken, Laura Hillenbrand's biography of an American Olympic runner tortured as a prisoner of war during World War II, and Year of Wonders, Geraldine Brooks' novel about life during a plague in seventeenth century England, were published relatively recently which shows that literature always offers new pleasures. 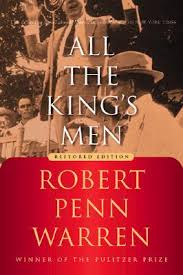 While he does not rank his selections, Gaillard does mention in passing that All the King's Men, Robert Penn Warren's 1946 novel about a demagogic Southern politician, is "quite simply my favorite book."

Gaillard was for many years an editor and journalist for the Charlotte Observer. He has written more than twenty books including Watermelon Wine: Remembering the Golden Years of Country Music, a look at the commercialization of country music, Cradle of Freedom, about the civil rights struggle in 1960s Alabama, and In the Path of the Storms, about Gulf Coast communities battered by Hurricane Katrina. He is currently writer in residence at the University of South Alabama.

Johnny Tremain by Esther Forbes.
Adventures of Huckleberry Finn by Mark Twain.
To Kill a Mockingbird by Harper Lee.
The Heart is a Lonely Hunter by Carson McCullers.
A Curtain of Green by Eudora Welty.
Killers of the Dream by Lillian Smith.
Uncle Tom's Children by Richard Wright.
The Fire Next Time by James Baldwin.
South to a Very Old Place by Albert Murray.
The Old Man and Lesser Mortals by Larry L. King.
Radical Chic & Mau-Mauing the Flak Catchers by Tom Wolfe.
The Unfinished Odyssey of Robert Kennedy by David Halberstam.
Prisoner Without a Name, Cell Without a Number by Jacobo Timerman.
The Longest War by Jacobo Timerman.
Night by Elie Wiesel.
Anne Frank: The Diary of a Young Girl by Anne Frank.
Slaughterhouse-Five by Kurt Vonnegut.
Hiroshima by John Hersey.
All Creatures Great and Small by James Herriot
Walking Across Egypt by Clyde Edgerton.
Clover by Dori Sanders.
All the King's Men by Robert Penn Warren.
At Play in the Fields of the Lord by Peter Matthiessen.
Snow Falling on Cedars by David Guterson.
The Grapes of Wrath by John Steinbeck.
Bury My Heart at Wounded Knee by Dee Brown.
Roots by Alex Haley.
Ava's Man by Rick Bragg.
The Great Santini by Pat Conroy.
Ahab's Wife by Sena Jeter Naslund.
Year of Wonders by Geraldine Brooks.
Adam & Eve by Sena Jeter Naslund.
Admiral Robert Penn Warren and the Snows of Winter by William Styron.
Salvation on Sand Mountain by Dennis Covington.
"Brokeback Mountain" in Close Range: Wyoming Stories by Annie Proulx.
Unbroken by Laura Hillenbrand.

Posted by tvmoviefan at 4:17 PM